Bubble Universes and why good communication is so hard at work

There is a theory in physics that our universe is but one of an infinite number of universes, each existing in an expanding bubble inside a faster-expanding super-space, never coming into contact with each other.

A similar thing goes on every single day at work. Each person lives in their own bubble universe of their own perceptions, feelings, emotions, and opinions regarding everybody else.

When we talk to each other, our words transmit only a tiny amount of our meaning. When we send email, or chat over MSN, or even worse, hold meetings and talk about other people behind their back, all this extra information is lost. You are working, at most, at 10 percent efficiency.

And that's not even taking into account the fact that any information or meaning you DO manage to convey is going to be twisted and distorted by the "bubble universe" of perception and emotion that each person is living in.

This is a real problem in software development, where it is absolutely vital that everyone is on the same page and shares the same goals and vision.

Preventing this from happening is not easy. You need a close-knit team of developers who like and trust one another. You also need freedom from interference by managers, who live in their own far more distant bubble universes.

So what should managers do with their time? That will be the subject of a future blog post.

This time on Knotty Geeks, we review the three methods of management, deal with our lizard brains, and come up with a way to fix reality. That’s next, on Knotty Geeks.

Book of the month:

The ten best years of my life

September 29, 2001 was the day that I married my soulmate, Jennifer Jang. It was easily the happiest day of my life up until that point.

Every day since then has been happier.

We chose the former path, and it has made all the difference.

I can’t even begin to describe the number of ways that my life has improved by being married to such a wonderful person. People sometimes refer to their spouse as the "ball and chain". I really dislike this metaphor.

But with her, I can fly. 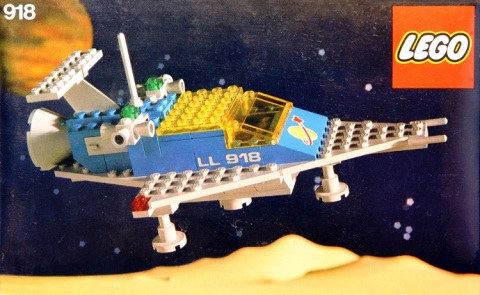 I was Googling around the other day and came across this site:
http://www.brickset.com/browse/themes/?theme=Space

Suddenly I was transported back into my childhood. My parents bought me all sorts of Lego Space sets including the Command Center, one and two-seat Space Scooter, and the holy trinity of awesome space ships: The One-Man Space Ship (shown above), the Transporter, and the awesome Galaxy Explorer.

Looking at these classic Lego Space Ships filled me with overwhelming nostalgia. It made me remember how amazing my parents were to me, which made me happy (for the memories) and sad (for their passing) at the same time. For a few moments it was hard for me to breathe. My heart was beating uncontrollably.

I still have all the pieces for all these sets, stored away safely in clear plastic bins.

I dug out my old Galaxy Explorer instruction sheet, and found the Rubbermaid bin with all my old Lego, and here is the result! 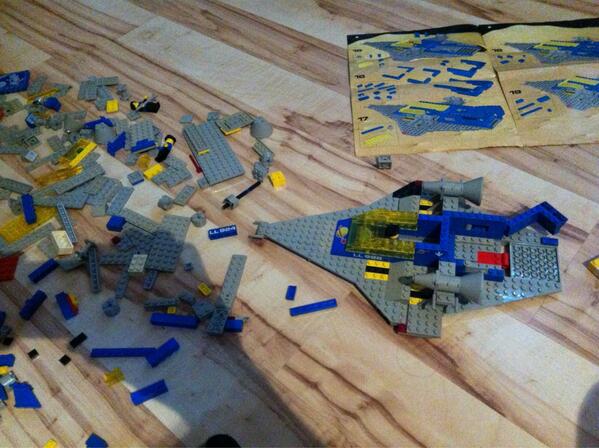 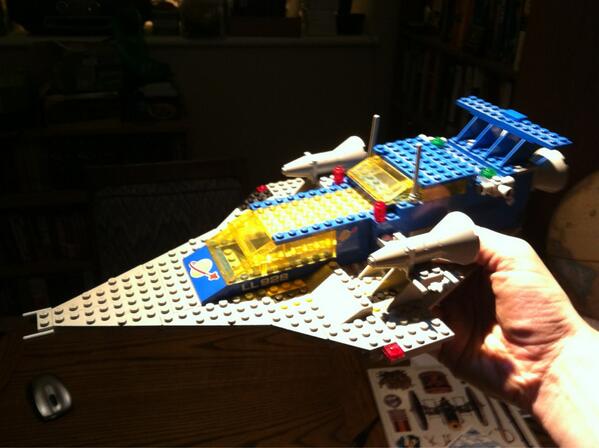 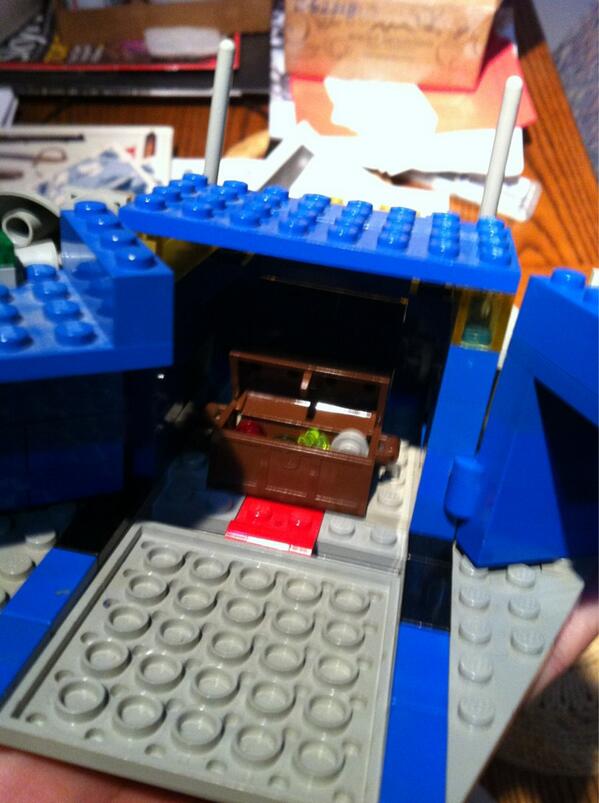 Ever have a dream?

Did you ever have a dream?

Was it silly and outrageous? Was it physically impossible? Did it involve time travel or conversing with dragons?

Let’s leave the dreams that are actually impossible aside for a moment. If I had a dream, say, to play for the NHL, it’s already too late. It would require time travel to get the number of years of training required and still be eligible for the draft. That’s okay. There are other dreams to chase.

If your dream is actually physically possible, why aren’t you doing it? Probably the single most common answer is fear. We feel that trying to reach for our dreams and failing would be much worse than simply not trying, so we avoid it. We do the absolute minimum required to keep ourselves going. We stay at the same job because it’s safer and easier to do so. That way, we get to keep the dream, but we keep our reality as well. As long as the two never meet, everything will be okay.

Except it’s not. Not really.

What if we took that fear and used it to keep from failing while we actively pursued our dreams?

Wouldn’t that be amazing?

We spend most of our waking lives at work. Most of us have gotten very good at identifying what is wrong with our workplace, and what we don’t like about our jobs. Ask anyone and they’ll talk to you for hours about it.

Now ask them about what their ideal work day would be like, or what their perfect job would look like. Suddenly, these same people are completely lost. They have no idea. Then they just laugh and say something like "I want a million dollars a year" or "I’d like to win the lottery."

Sorry, but winning the lottery isn’t a career plan. And nobody is going to give you a million dollar a year job. It’s just not going to happen.

Besides, say you did get a job that paid a million dollars a year. What would you do?

Answering this question is not easy. But doing so could change your life.

People who ignore facts, and those who don't

Recently I argued with someone over a crucial decision at work. I presented over four decades of scientific studies proving my point, which were ignored and dismissed in favor of "belief" that the opposite was true.

It was depressing to me that people actually think this way. I wondered how humanity actually managed to achieve everything it did when we clearly are not a logical species.

Then I thought to myself: are there any classes of people who DO accept facts a majority of the time? And there are. They are scientists, engineers, and computer programmers. If they can't accept facts, they can't do their job.

These people BUILT our civilization. Everyone else is just living in it.

Don't tell me "This is the way the world is going"

It's a standard excuse for any boneheaded decision these days. "Oh, the industry is going this way, we should follow", or "Oh, this is just the way the world works".

These are the words of people who are too scared to think and act for themselves.

Is this really the world you want to help make?