Review - The City We Became by N.K. Jemisin 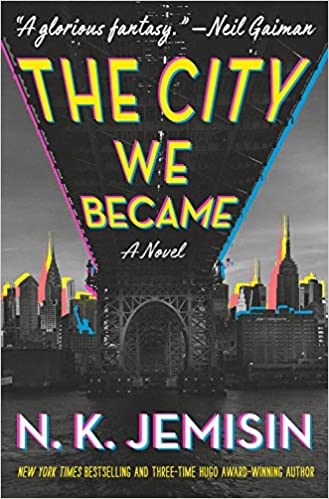 For most of my life, I’ve tried in vain to explain why I love cities. Despite numerous and obvious downsides—the noise, cost of living, the pollution, the unending crowds—I’ve never wanted to leave the city I was born in: Vancouver, BC. Many New Yorkers have an even stronger version of this sentiment. But it took author N.K. Jemisin to express the feeling I never could properly quantify. Her latest novel, The City We Became, is a triumphant love letter to New York, while simultaneously being a rollicking good sci-fi action story.

In The City We Became, the New York of present day is under attack by inter-dimensional beings of great power and terrifying sensibilities. In response, the combined psychic energy of the city itself has manifested into six people: avatars of the five boroughs of Queens, Brooklyn, The Bronx, Manhattan, and Staten Island, as well as one person who is the city as a whole. These six New Yorkers, each from diverse backgrounds and with normal individual lives, find themselves turned into beings of great power. They must race against time to find each other in order to defeat the enemy, who wants to destroy both them and the city they call home.

In the novel, New York is a young city still in the process of “being born”. Other cities around the world have suffered similar attacks throughout history, and either survived intact or been partially or completely destroyed (New Orleans getting hit by Hurricane Katrina is given as an example of the latter). Each city manifested its own avatar, but New York was the first to produce more than one. And they’ll need them all, because the enemy is particularly mad this time and the consequences might be even more dire for the human race.

The attackers, led by the manifestation of the sickly-sweet Woman In White, bear more than a little resemblance to the Elder Gods of H.P. Lovecraft’s Cthulhu mythos. This is a deliberate choice. In this world, all great fictional enemies (and all myths and legends, such as Atlantis) exist in other parallel universes and dimensions. This adds to the familiarity of the struggle, even as the implementation of the attack by the Woman In White is unique. The real brilliance of the novel, however, comes in the rationale the enemy gives for her attacks. I won’t spoil it here, but it puts the conflict in a different light and adds more layers to the “good versus evil” narrative.

The Woman In White is not above using the systemic racial inequalities present in modern-day society in order to further her own ends. This adds another level of depth to the story, as the enemy allies herself with people who are already leaning towards the wrong side of the fight for equal rights and equal justice. It brings our current problems into sharp relief. When the Woman In White tries to sway the avatar of Staten Island—the only white avatar of the group—over to her side, we can see how inequality hurts all of us, even those of us born into privilege. Staten Island’s avatar lives a safe and cushy life, but she’s also held back by her domineering father and passive mother. The reader ends up rooting for her to do the right thing, but is anxious that she won’t.

Coming out during the COVID-19 pandemic and followed by the Black Lives Matter protests, this book has ended up being perfectly timed in its release. It’s a celebration of both cities, which are currently under attack by invisible deadly enemies, and black voices, who struggle to be heard. It’s powerful social commentary, but it’s also a fun action adventure, like Black Panther crossed with War of the Worlds.

Cities represent both the best and worst of us. The energy of millions of people coming together to live and work in the same space has been the driver of human civilization for millennia. But cities are vulnerable, and always have been. The City We Became is a powerful defense of cities, both literally and metaphorically. I love my city, as clearly N.K. Jemisin loves hers. Her novel is the first of a trilogy, which is exciting—I’ll definitely be buying the next two installments.