I can’t get enough of it. Whether it’s the new GSL in Starcraft II or the classic Starcraft I MSL, OSL, or Proleague, I’m completely addicted to watching it.

And I’m not the only one. People are making pilgrimages to South Korea just to hold up epic signs like this for the TV cameras: 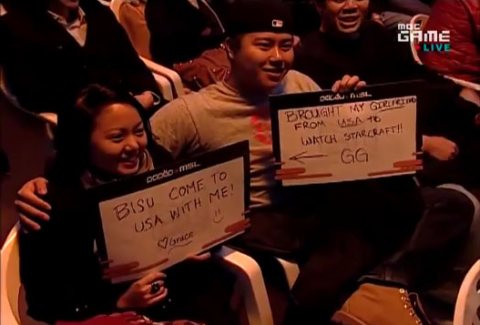 Interesting! Most of the tournaments I watch involve predominantly NA/European players. Often the commentators are NA guys like Day9, who casts good replays for their learning value in addition to live-casting tournaments.

For example, I recently watched a good bit of the Reddit Invitational, and specifically a lot of interesting ZvP matchups.

My main 2v2 partner and I have clawed our way from the dregs of bronze league to rank 2 in our gold league. Maybe we'll even get promoted to platinum one day! :)

Good for you! I haven't played SC2 multiplayer that much (just a handful of games) because I'm worried I'll get too sucked into it... just like I got sucked into watching the professionals play.

Last night's GSL matches between Jinro and Idra, and MarineKing and Nada were epic, especially the elimination races in the latter matchup!

I've played over 500 league games since the game launched. Over half of those were 2v2s. :shocked:

It's amazing how much things have changed in just a year. I went from having not enough Starcraft to watch to having far too much for any one human to handle. I got not one but two Ars articles out of it as well, and got to see Boxer live in person.

It's been a wild ride.

My playing has lapsed in ladder season 4, but I'm watching more than ever. I have an MLG sub and a NASL sub, and MLG Providence is this weekend. I'm going to my first Barcraft, since before the big move I lived too far away from the nearest Barcrafts to be able to attend. It's going to be awesome. :)

But right now I'm watching Dimaga vs Puma in NASL playing to determine who gets the top spot in their division for seeding in the NASL season 2 finals. Holy crap. The nice thing about NASL is the availability of content -- if they aren't streaming when I feel like watching some Starcraft, I can look through the VOD archive and pick out my favourite players.

I picked up a Boxee shortly after the move, and love the fact that I can sit in a comfy chair with a beer and throw "the game" on my 60" TV, streaming in 720p or 1080p. So awesome. When I have an evening alone, I often do that over dinner. :D

When I went to PAX this year, I met up with Marcus "djWHEAT" Graham, who was manning the Alienware booth casting Guild Wars 2 and other games.

He invited me to the Chau Bistro, a short taxi drive away from the event, and we watched MLG Raleigh at Barcraft. I was like a minor celebrity, walking in with djWHEAT and introducing myself as the guy who wrote the Ars Technica article. I had a guy buy me a drink!

Oh, and the drinks were all Starcraft-themed. I had a Nuclear Launch and a Bel'shir Beach.

The best was the shots: 1 shot was called a GG. An empty shotglass was called an Idra GG. People actually bought them, sometimes by accident.

IT WAS SO AWESOME!

I went to my first Barcraft with some friends for Sunday's MLG. It was awesome. :D:D

That's awesome! How many people were there?

It was pretty empty when we got there around 1 PM, but by the semifinals there were about 150 people and the place was full.

BTW, Ajar, did you want a custom avatar?

What was your OSY username again?

Yeah, I was the twinkster.

That is fracking awesome.

I'm still in the "paper" league in SC2... on paper, perhaps, I could be fairly decent, but since I never play ladder, I'll never know!

At the same time, I'm still <i>watching</i> Starcraft professional competition all the time, so maybe it's just laziness on my part. Easier to watch than participate.

What do you think.. should I even bother trying ladder at this point? I hear that the competition is much harder now, since all the casuals have stopped playing. I only am interested in 1v1.

We may have run into EG Machine on the ladder the other day. :shock: His profile showed rank 86 grandmaster, but he was off-racing as terran if it was him. There was a German protoss pro on that team as well, who was cruising along at 150+ APM for the entire game.

They cheesed us, though -- proxy 2gate, cannon rush, and 2rax from Machine. We barely held it off, but couldn't capitalize. They won.

My girlfriend's brother has been in bronze since the beginning, and still seems to enjoy the game. If you follow the game, you know as well as anyone that you can get to at least gold by focusing on macro and not worrying too much about army composition. I got to gold 1v1 by using Spanishiwa's opening, but then I stopped playing. Getting to gold was my 1v1 goal, and the amount of effort you need to get past that level increases exponentially. DrFaulken has been stuck in 1v1 platinum for as long as I've known him (close to a year), and just hasn't been able to break through into diamond.

I actually prefer the team game. I'm a big co-op gamer, I love being on the same team with my friends. And in Starcraft, I'm not a crisp decision-maker -- I theorycraft quite well, but in the actual game I panic big time. I love having allies on Vent of Skype to plan with during the game, so I don't end up double cancelling a hatchery in ZvZ... :o

No one on our team is actually master-level; I peaked at gold, DrF is plat, and wurmr was silver last time I checked. But as a team, we punch above our weight. I've generally been better as a teammate than I've been in 1v1. Blizzard openly doesn't balance for 3v3, but they do balance for 2v2, which was my preferred format for a long time. I actually wish we'd get some 2v2 pro-level play, because I think it would be a lot of fun to watch. Still, even without Blizzard's active management, 3v3 is a lot of fun. 4v4 gets a bit out of hand, though.

One of my former 2s partners, RaveBomb, stopped playing team games last fall to focus on 1v1. He got himself from gold to plat after quite a bit of work, so you can definitely do it. But unless your mechanics are already crisp, be prepared to put in a lot of time if you want to get to gold or above.