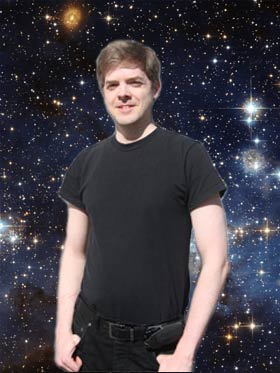 I was born in Vancouver, British Columbia on March 16, 1972, to Louis Elton Reimer and Gail Patricia (Edmondson) Reimer. Our family moved to Winlaw (close to Nelson) in the interior of BC when I was just one year old, and then again to the small town of Gibsons, BC when I was three. I grew up in Gibsons and went to elementary school there, but when it came time to go to high school I went back to Vancouver to attend Eric Hamber Secondary. Thanks to the Challenge Program I was able to finish in just four years instead of five, and started my B.Sc at the University of British Columbia when I was just 16 years old.

Some detours and interesting side-adventures later, I graduated with a B.Sc in Physics from UBC, and then got my Bachelor’s of Education from UBC a year later. I taught at Kester Grant College (a private ESL high school) and then Saint George’s Secondary for a year, then decided teaching wasn’t for me and went on to other prospects.

Married since 2001 to my wonderful soul mate Jennifer. Quite simply the most amazing woman in the world. She is intelligent, gorgeous, caring, funny, and just all-around amazing.

None, although I did once have a beautiful tortoiseshell cat named Zoe.

Many of my old computers have gone to Silicon Heaven!

No Hackintosh. I did have OSX running in a VM once, just to say I'd done it. Oh, and Rhapsody DR2. :)

I had a nice long post for OSY, but I keep getting an error when I attempt to submit it:

Hmm, haven't seen that error in a while. Are you starting a new thread? Can you email me the text of the post (jeremy_reimer AT hotmail.com) so that I can try it on a test account and see what the issue is? Thanks!

*not counting a basement full of old Macs he's been selling.

I had this error when I tried to post to OSY just now:
ERR: list or string expected in function replace : nill

Anyway, what I was posting about is this session at Vancouver Writers Fest, with William Gibson:
http://writersfest.bc.ca/2014/events/64-probables-and-impossibles