Sailing the Atlantic and soaring in space 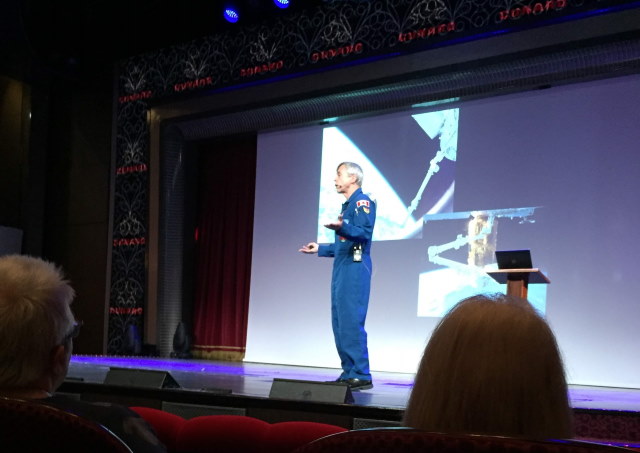 I just got back from an adventure on the high seas. My two favorite aunts found a space-themed cruise sailing from Southampton to New York on the Queen Mary 2, and invited my wife and I to join them.

The ship was magnificent. Commissioned in 2003, the QM2 is the last ocean liner remaining in service. With a sleek design evocative of the old White Star liners, the ship plowed through the Atlantic waves with little effort. Fortunately no icebergs were in sight!

On board was an all-star lineup of speakers including the Canadian astronaut Dr. Robert Thirsk, who talked about his experiences on both the Space Shuttle and the International Space Station. Dr. Thirsk was humble and modest, even though he has several advanced degrees and has been to space multiple times.

Other great speakers included Dr. Dan Wilkins, who gave a fascinating talk about supermassive black holes, and Stephen Attenborough, who gave us just a taste of what it might be like to join the 500-odd people who have ever been to space by purchasing a ticket with Virgin Galactic.

The talks inspired me and reminded me of the joy I experienced as a child watching Carl Sagan explain the wonders of the universe on Cosmos. It made me realize how much I missed learning about astronomy and space science. Next year, after I've launched Silicon Minds of Mars, I'll start thinking about how I could get back to that joy of discovery.

Even before the CV-19 crisis, I would have to have been kidnapped to get me on a cruise ship, a cross between a tiny Disneyland and a senior citizens' home.

But I have always wanted to sail on an ocean liner like the QM2. My ideal itinerary is American (U.S. or Canada) east coast to England, and back. I investigated that dream and learned that there is no such itinerary (I should say "was" because that investigation was pre-CO-19). The ship goes from England to other places and doesn't return to the east coast for many weeks if not longer. Evidently most of the west-bound passengers fly back. Just to make my dream further out of reach, in it, I book first-class accommodations and expect everyone in that class to dress for dinner (black tie). Think "Titanic" LOL.

AYB would have spent an hour shuffling deck chairs, just to be that guy!!!

We dressed for dinner, but tuxedoes weren't necessary. A dinner jacket, dress shirt, and tie was fine.

I'm glad I went on that cruise because it was an experience crossing the Atlantic like that. It's not something I'll ever do again. Ironically, both my wife and I caught really bad colds while on the ship.

Its the return of Woman from RUSSIA!

PUTINBOTS are after OSY!!!! TAKE OFF EVERY ZIG!!!