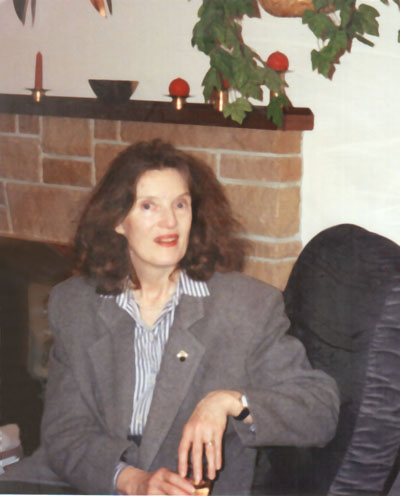 This is the speech I gave at Gail's memorial service, which was held on Friday November 19, 2010.

I’d like to tell you a story about a remarkable woman. This is the story of my mother, Gail Patricia Reimer, and about how she shaped me into the person I am today.

She was born in Vancouver, British Columbia, on April 9, 1938, to Mildred and Bert Edmondson. Joining her would be Margaret, Elizabeth, Barbara, and later John. As the eldest child, Gail was expected to help raise her other siblings. She went to high school at McGee Secondary and dreamed of going to university.

However, Gail had to work full-time in order to help support her family. The family’s expectations were that Gail would find a “nice Baptist man” to get married to. She had other ideas.

At a church social she met a dashing young Naval Aviator who was on leave. She quickly fell in love with her “Hero Jet Pilot”, and they flew off together to the other side of the country. Gail and Louis were married in Halifax, where he was stationed. She got a secretarial job at Dalhousie University.

These were happy times. Gail was part of a lively social scene and she enjoyed her work. One thing puzzled her, though: she couldn’t understand why she didn’t type as fast as the other secretaries. She asked a co-worker, who told her: “Oh, I never read what I’m typing.” Gail, like me, could never do this. The content and the meaning mattered.

Gail and Louis moved back to Vancouver. Their first child, Suzanne, was born in 1968. I came along in 1972. Lou had decided to leave the Navy and go back to university. They bought a house on 34th Avenue, and settled in for a nice domestic life. Gail got a job working first at Carey Hall and then at the purchasing department at the University of British Columbia, and took night classes to get university credits such as English 100.

Then came the first of many challenges. Lou had a stroke, and was hospitalized for many weeks. When he returned from the hospital, his personality changed forever, he suddenly decided to move the whole family to the tiny town of Winlaw in the interior of BC. I became very sick as soon as I was put on solid foods, and nearly died.

Gail’s response? Besides saving my life, it was to create an idyllic environment for her two young children to grow up. Suzy went to nursery school and started excelling from the moment she walked in the door. I had the kind of childhood you read about in Calvin and Hobbes comics— exploring old barns, playing with our horse, Star, even digging a tiny swimming pool one summer.

When I was four years old, we left Winlaw and drove to the coast to the town of Gibsons. Here I could meet new friends, ride my bicycle all around town, and in the summer we would stay at Gail’s favourite place in the world: our cottage on Keats Island. This place was special to Gail because she had spent her own childhood summers at Keats Camps.

Gail taught me important lessons in those early years. Once when I was very young I was jealous of a friend’s collection of rocks and shells. I didn’t think it was fair that he could have all those beautiful things, and maybe it was more fair if I took some. She took me aside and taught me about right and wrong, without getting angry or upset. She would always explain things to me if I asked, no matter how precocious I was being.

When I was in grade seven, Gail taught me how to take proper lecture notes and how to write a formal essay, with an introduction, supporting paragraphs, and a conclusion. Years later I would be astonished that some university students still didn’t know how to do these things!

Gail worked for many years at the Gibsons Public Library, first as a volunteer, then as one of the first two paid positions as Children’s Librarian. She worked tirelessly to get better books for the children and her Story Time readings were incredibly popular. She ended up doing most of the Librarian’s job as well, and got me my first job as a summer student.

Suzy and I grew up and went on to university. Gail had always stressed the importance of education, but had never been able to go to university herself. Suzy and I convinced her that she should go. We found her old records, including English 100, which were still valid. Gail enrolled in the Faculty of Arts with a major in Women’s Studies, and with a little nudging, dove into her studies. I taught her how to use a word processor. One of the very first things she typed into Microsoft Word was the statement: “Jeremy is being very mean and making me type this by myself.” Secretly, however, I think she was thrilled to be doing this on her own. She asked me for help with writing essays, and I explained how do to the Introduction, supporting paragraphs, and the Conclusion… and I said: “Didn’t you teach me this stuff originally?” She laughed and said “I know, but I’ve forgotten!” Incidentally, her essays are really good.

We lived together in an apartment on 16th and Alma while we both finished our undergraduate degrees. We graduated in the same year. She came to my ceremony, but didn’t want to go to hers. We then moved to the co-op in Marpole, and then to an apartment on Dunbar and 49th which was close to my new job teaching at Saint George’s School. Gail was very supportive of me when I decided to leave teaching. Gail was incredibly supportive when I met Jennifer, and thought she was the best thing to ever happen to me, which is of course true. She was very happy to attend our wedding in 2001.

In 2003, she decided that she wanted to go on an “adventure” and left for New Brunswick with her sister and my uncle. She wanted one last adventure, and she did it.

My fondest personal memories of my mother include the time she bought me a big hardcover book on the Solar System because I “neeeeeeeeeded it!”, getting up at 4:30 with me to watch the Space Shuttle launches, and making me hot chocolate on cold winter’s nights when I was on the back porch peering through my telescope at fuzzy galaxies. She got me my first computer when I was only seven years old, which had a profound impact on my career and my life. I will never forget the lessons she taught me and the memories she gave me.

This was a very sweet remembrance Jeremy. Very thoughtful. My belated condolences.