After finishing my third novel in my trilogy (it’s still in editing) and starting the planning for a series of short stories, I wasn’t sure if National Novel Writing Month was a good idea. I had lots of projects on the go, and what could I possibly do in a month?

Then I remembered my short story The Stalker, which came out of my love for professional Starcraft. It had a lot of downloads in October, and for the first time even beat out my science fiction short story Starfarer. I had always told myself that if The Stalker did well enough I would make a full-length novel out of it.

Well, this was my chance!

The novel is called The Last Bonjwa and after three days, I’ve written 5,000 words, on pace for the goal of 50,000 by the end of November. I’m already really excited about this story because the faster pace of writing is showing up in the text itself. In just those first 5k words, our hero has won a tournament, gotten blackmailed, lost his best friend, got kidnapped, been interrogated by shady government people, had his apartment broken into, and was chased off a train by a tall stranger in a dark overcoat.

I have no idea how I’m going to tie everything together but I’m having a blast trying. The novel is also kind of a love letter to the professional Starcraft scene and Korea itself.

Look for it in time for the holidays along with Beyond the Expanse!

EDIT: A WINNER IS ME 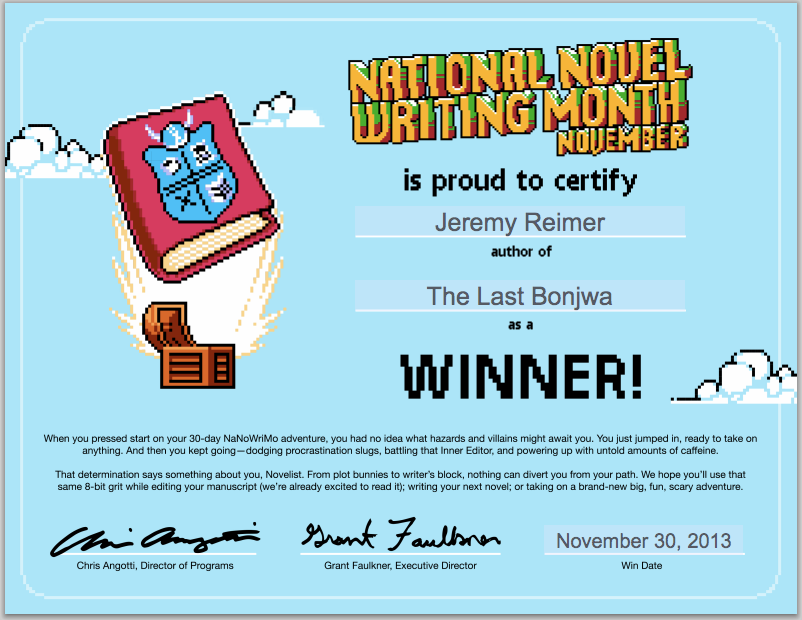 I won! I won! 51,345 words, and the story is AWESOME. I had to frantically write three to four thousand words each day for the last few days to catch up, but I think it helped--it added a sense of urgency to the novel just when it needed it!

Well, I’m going to be doing a very quick copy edit (I don’t think it even needs a story edit, it’s all really tight) and then formatting it for Amazon and Smashwords.

I did the cover page last night in a fit of creativity. The model is something I got and posed in Daz3D, then modified in Photoshop. The background is a night-time concourse in Seoul, where most of the story takes place, but with some weird filters applied to make it look a bit other-worldly.