Was Brood War a better game than Starcraft II? 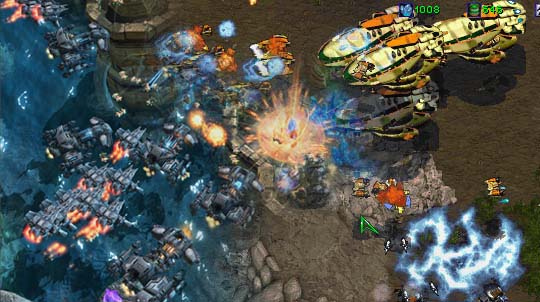 This discussion comes up all the time on forums, between fans of the original Starcraft and fans of Starcraft II, in particular, the professional scenes that evolved around those games.

I watched a ton of both, so I figure I have some idea about which game was "better".

But the answer, like many things in life, is much more complicated than just "this game is better than that game."

Pro Starcraft Brood War at its height, from 2006-2008, was a very unique thing, unlikely to ever be repeated. The scene essentially was 100% Korean, and 100% KeSPA. There were foreigner tournaments, but the level of play was ridiculously low. The players were essentially amateurs. Day[9] was a high school kid and Artosis would quit his job every year a few months before WCG regionals to practice. These were the top-level non-Korean players at the time. Whenever they played Koreans, (which was only once a year) they would get utterly and completely destroyed, like playing against the computer on "Easy" level destroyed.

Meanwhile, in Korea, KeSPA ruled with an iron fist. To stay on a team you HAD to practice well, like 10 hours a day MINIMUM, and you had to work with the coach and do whatever he said and take no breaks ever and you had no negotiating power for your salary AT ALL, and if you didn’t like it? Too bad, there are 50 Koreans begging to replace you. Deal with it.

This pressure cooker environment weeded out the weak and left only the super-strong. Players like Flash and Jaedong would practice until their eyes bled (in Jaedong’s case, this was literally true). The level of competition was so close at the top that any player could take down any player, so everyone had to be on top of their game. This made for exciting matches, with daring cheese and "economic" cheese plays thrown in with series where the multitasking and macro levels went through the roof. It was exciting.

With Starcraft II, everything changed. KeSPA players weren’t playing originally, so the Korean scene was made up of B-teamers, formerly retired players, and a smattering of foreigners, a few of whom managed to do quite well and even won tournaments. The Koreans were overall better, but it wasn’t a complete roflstomp like it was in the Brood War days. This was exciting, but for a different reason. The games weren’t as high-level. They just weren’t. But the situation was different. It wasn’t just KeSPA. There was a thriving international scene. Players could win tournaments without being slaves working in the salt mines 12 hours a day. They could actually compete for teams to get the best salary possible (this was never possible in KeSPA-- the "free agency" they offered was in fact the exact opposite)

The game itself also had some problems. One of the biggest was Broodlord-Infestor. This was actually something that happened almost every game in PvZ, and Protoss had only the "casual fun unit" of the Mothership to try and get a lucky Vortex, and if it missed, or the Zerg split the Brood Lords, or Neural Parasited the Mothership, too bad, it was over. This wasn’t so much fun to watch.

Now, with Heart of the Swarm released and the KeSPA players switching over, things are different yet again. HoTS fixed a lot of problems with the original Starcraft II. Protoss got a counter to Brood Lords (the Tempest) so PvZ wasn’t quite as dumb as it used to be. Terrans got Widow Mines which made things more random and yet skilled players could also bait the shots out with single units. Zerg got Swarm Hosts, which aren’t as good as Lurkers but at least they made for some different strategies and let them "siege up" and do different things, and Vipers allow high-APM players to do amazing abducts. Even Oracles reward the super-skilled, high-multitasking player. It’s better than Wings of Liberty. MUCH better.

Is it as good as Brood War? That really depends on how you look at it. The KeSPA players are certainly taking it to the next level-- look at recent GSLs or Proleague-- these guys are just hammering through different ideas and builds and they are starting to dominate again. But KeSPA doesn’t allow them to travel to international events (with the one exception of MLG) and so they are still isolated from the international scene in some ways.

But is the GAME ITSELF as good as Brood War? That’s really hard to say. I think a lot of what made Brood War great was the players. They suffered for our entertainment, but they raised the game to an art form doing so.

There was something that happened at the end of Brood War when players had to do a "hybrid Proleague", where they alternated Brood War and Starcraft II (at the time, Wings of Liberty). I don’t know if you watched any of the games, but I did. They were terrible. The KeSPA players didn’t care about the game any more because they were all practicing Starcraft II. So when they played Brood War, they just did whatever, and hoped their mechanics would save them. It worked, but dear God the games were boring. THEY WERE BORING.

I thought about this, and I figured that a lot of what made Brood War special, the amazing "metagame", wasn’t so much a factor of the game itself, but it was something the players brought to the game.

The other thing is that back in the day, the KeSPA players were it. There were only so many teams, and each team had only so many players on their playing roster. Sometimes a B-teamer would make it up to the big leagues, and sometimes players retired, but at any given time you had maybe 10 teams and maybe 8 players on the bench. 80 players. There are easily three to four times the number of pro players in Starcraft II.

Having fewer players makes it easier to build storylines, to build rivalries, and to build hype. There were also fewer tournaments, so each one was more special. In Starcraft II, there is a tournament every week and every weekend, and sometimes two at a time.

So, a lot of it is nostalgia, but justified nostalgia in some ways.

A tiny amount of it might be the game itself. It might be. I’m not willing to rule that out.

There are pro Brood War tournaments starting to happen in Korea these days. People love the game that much that they will play it even without KeSPA support and salaries. I’ve watched a few of these games. They’re pretty terrible. These are former pros, but they aren’t doing the amazing things that I remember from Brood War. They’re doing dumb things and winning for dumb reasons. I can’t watch them, even though they are playing the ostensibly "better" game. Not even for the nostalgia value. I tried. The excitement just isn’t there.

And it is there for Starcraft II. So I’ll continue to watch.